​HEALTH  GUARANTEE
We give a 72 hour well puppy check up guarantee.
Puppy buyer has the option of having a well-puppy check-up guarantee by a licensed vet

withing 72 hours of leaving our care.
If for any unforseen reason the puppy flunks the Well-Puppy Check-Up the Breeder

will replace the puppy with another puppy of same breed, gender and price as one

becomes available.
We do however ask that if for any unforseen circumstance a puppy purchased from us has

any diagnosed genetic issue during its lifetime that we be notified.

We are NOT responsible for any Medical/Vet/Med expense once puppy leaves our care.

Puppies are susceptible to Bacteria, Virus and Stress.

Isolated to your home and immediate family until after it's 3rd round of shots.
A puppies immunity does not exist until it has received its full 3 round of shots.

Puppies are easily stressed and can become ill.
We recommend Honey Nut Cheerios as treats especially with Yorkies.

We also recommend Cottage Cheese and/or Plain Yogurt as a side dish with meals.
Once a puppy leaves our care we can no longer access its issues should it develop any.

to be able to call or get immediate attention for any puppy not adjusting well.
The Shot record we give you should be copied and a copy given to your Vet.
Please do NOT allow your Vet to give needless Vaccinations as this could cause Immune Issues.

Occasionally puppies become depressed from leaving Mom, Siblings and an

environment they have known their whole lives and refuse to eat and/or drink.
This is a dire situation and new owner must be prepared to take the responsibility

and time to work with puppy or get it to a Vet.
Small puppies can become lethargic and/or hypoglycemic when not eating especially

from not adequately eating  to keep their blood sugar up.
Purchasing 2 puppies to raise together helps reduce the stress.

We do give discounts for multiple puppy purchases.

Puppies MUST HAVE REASONABLE REST periods.
Small children should always be supervised when around a puppy and taught responsible

We do send home a sample pack for our puppy buyers to use to switch to whatever food they plan to use.

3-4 times a day with a side dish of Cottage Cheese and/or Yogurt.

I've included a pic of both so you'll know exactly what we feed.
Please be advised that any sudden change in diet can cause digestive upset.​​​ 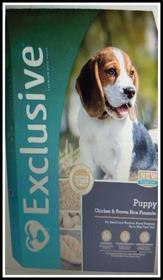 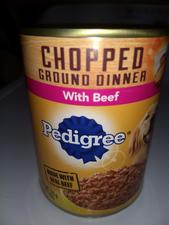 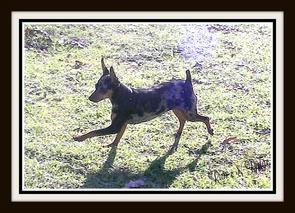 1.  Please talk with ANYBODY who has a decision in your purchasing a puppy such as           Husband/Boyfriend/Significant other,  Landlord, Mother/Father ... etc.  PRIOR to contacting us.

2.  Please review our puppy page at http://www.runningridge.com and if your interested in purchasing a

3.  Please be aware that we DO require PICK UP within 72 hours of reserving.

Puppies are NOT Reserved for any individual until which time we receive the CONFIRMED PICK UP DAY and TIME.

​Procrastination on sending Pick Up Info can result in puppy being sold to another person.

If you wish to reserve a pup then the Pick Up Date, Time and Location is due immediately.

I do not and will not hold a puppy even for an hour without Confirmed Pick Up Info.
​

4.  IMMEDIATELY AFTER PICK UP Info IS Confirmed we require to be notified with:
A.  Your Name

B.  Address
C.  City/State/Zip
​D.  Phone Number
Puppies are NOT reserved until we receive this information.

5.  Puppies are to be picked up by APPOINTMENT ONLY on a First Scheduled Basis.

the date, time and location most convenient for you.

We will stop communiction with those asking for a reduced price.

We do give $100.00 discount per puppy for multiple puppies purchased at same time

AND ready to go at the same time.

We also give $100.00 discount on additional puppies purchased from repeat buyers.

of puppies by purchasing 2 at same time. 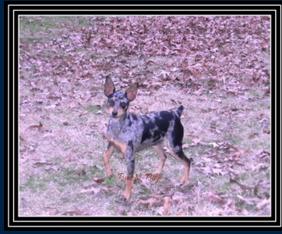 Run-N-Ridge is the proud  FOUNDING Breeder of THE Harlequin Pinscher.

There are breeders who have copied the PATTERN but these are NOT Harlequin Pinschers.

Beware of those registering with other Registries claiming they have TRUE Harlequin Pinschers.

other Registries to Document Fake Harlies.

since the Founding of the Breed.  Those being claimed to be Purebred Harlies and registered

has chosen to break a legally binding contract.

Being Banned from a Registry does not give an unethical breeder the right to break a contract.

All HPA breeding dogs must be Genetically Tested for MPS VI, PLL, Cystinuria and required to

be bred responsibly based on those results.

ALL HPA breeding dogs must be DNA tested for parentage verification.

HPA is currently highly recommending DM testing and breeding responsibiy based on results.

and is the ONLY registry which has the complete data-base for the Harlequin Pinscher.

Our dedication to the breed shows in the quality of the dogs we have "CHOSEN" to breed.

​R-N-Rs motto is "If your gonna breed then breed to better the breed and not for financial gain".

of dog and worth more than a Free Farm Dog.
Run-N-Ridge continued to breed Merle and Brindle Rat Terriers when UKCI caved in to higher-than-thou

newbie breeders who wanted the Merle and Brindle patterns eliminated.  UKCI notified me that my

papers on my Merles were pulled and no longer eligible with UKCI for registration.
YES - we had UKCI issued papers on them which were Eligible Papers one day and not worth

the paper they were printed on the next.   UKCI at that moment became irrelevant, unethical, unmoral

and useless for Rat Terrier registration IMHO.
UKCI made a strict standard for the Brindles at that time which is RIDICULOUS as the Brindle Gene

nor the dog is able to read a piece of paper to know their only allowed to mark on the dogs head.
We have proudly continued to Produce ACR registered, Fully Pedigree Documented, Outstanding Merle and Brindle Rat Terriers as well as those of all Colors and Patterns.

Our Rat Terriers are Genetically tested for PLL and PRA and being bred responsibly.
We raise RAT TERRIERS and not the Teddy Roosevelt Terrier (*aka Type B)

Class Act is the ORIGINAL Importer of Biewer Yorkies.
We established the Biewer Yorkie Association in which to register the Biewer Yorkie here in the U.S.
As with all of my dogs I LOVE Colors and Patterns.
We raise Traditional, Brown (*chocolate), Creme, Piebald, Belted and Tri  Biewer/Yorkies.
Our Biewers and Traditional Yorkies are registered with the BYA.

These new on-the-scene Yorkies may or may not be full-blood Yorkie.
The Europeans have falsely stated these are Yorkie mutations to get the pattern but our

From our testing we have results from being a Biewer, to Yorkie to cross-bred.

point a MERLE dog of another breed was used to produce

the Merle pattern in a Yorkie bloodline.

Yorkies to be registered but in 2021 they have now banned Merle Patterned Yorkies.

The only problem I see is the lying which has taken place in proclaiming the Merle gene was caused by a mutation.

With this new classification of MOSAIC Yorkie they are now considered a purebred unto themselves.

​Run-N-Ridge Need to Know PRIOR to contacting and/or Purchasing:

If your looking for a run of the mill dog then this is NOT the right place for you.

We do not do excessive breeding of our dogs like so many others do.

Be diligent and do your research - don't support those over-breeding their Dams.

If your intentions are to breed a dog till it's no longer Profitable then please look elsewhere.

We do not breed based on the fact we have put money and time into an animal.

We do not breed CUTE - CUTE is a term for beloved Pets - not breeding dogs.

I do not breed bad quality, short-legged, barrel body type, round headed dogs - these type

dogs are NOT breed quality and should NOT be bred.

Excellent Quality and Health are the criteria of our breeding program.

We do not live off the money our dogs generate.  Both my husband and myself

have full-time jobs which pays our bills.  My dogs are a life-long Achievement

which I happily get to share with my new puppy owners.

every dog is breeding quality and breeds simply because they own one.

clubs we have chosen and are NOT to be dual registered with any other clubs/registeries/associations.

Offspring from ALL dogs of our bloodline are required, by legal contract,  to be registered with our chosen Registries.

Purebred Bloodline)  with any other registry it's either a lie or

being bred by an unethical immoral breeder who has chosen to illegally break a binding agreement.

We breed responsibly based on Genetic Health and the Quality of an animal.

having a LONG LIFE with fewer health issues.

​healthiest pup possible for many years to come.

We have made this page in the attempt to answer potential puppy buyers questions.
Please read through this page thoroughly.

I realize it is long and detailed but it is worth your time to read it in it's entirety.
Every puppy buyer is given the option to read this and is bound by it's content

whether they choose to read it or not.
If there are questions unanswered here please text me at

Pick Up:    Puppies can be picked up in Texarkana Arkansas/Texas.

A.  All puppies must be picked up within our Time Frames.

Please do not purchase a puppy if you can not arrange your schedule to meet ours.

Delivery:  We do not offer *to home* Delivery Services.

Meet-Up:   We have specific meeting points to meet a Puppy Buyer.

We bring only the puppy being purchased via appointment only.

Our meeting points are:

Shipping:  We do not offer "Cargo" Shipping Services.
A buyer at their own discretion, responsibility and expense may:

1.   Hire a flight Nanny or Buyer Fly In

(*we will meet a Nanny or Buyer at the Texarkana, AR. or Shreveport, LA. airport for free)

* under extenuating circumstances and by PRE-ARRANGED we can meet at:

(*We will waive Airport Fees with purchase of 2 puppies being picked up at same time.)

We do not hold puppies for 16 weeks to meet United Airlines new policies.

We can NOT accomodate you with a puppy if your planning to fly United.

If flying into Dallas we highly recommend "Southwest Airlines" coming into Love Field.

2.  Hire Ground Transport.  (*we will meet a transporter along a major highway in Texarkana.)

What we do and don't do in relation to our Puppies

Puppies leave our care current on SHOTS and WORMED.

Puppies will have puppy papers for registration unless stated otherwise.

We use only  ACR, HPA and BYA registration services.

Our Contract requires  ALL of our Puppies and any subsequent offspring be required to remain with one of these registries.

Tails are docked at 2 days of age as well as dewclaws removed.

We can leave tail and/or dewclaws by FULL PRE-PAID Reservation.

MICRO-CHIP:  We Micro-chip all of our puppies PRIOR to leaving our care - NO Exceptions.

If you are against micro-chipping you will need to find another person to purchase from.

Our Micro-chips are registered to us.  We give buyers a form so they can ADD their name to the

micro-chip database as Primary Contact if they so wish.

Costing of adding a Primary Contact is a one-time fee of $19.95 which is buyers expense.

The Pictures we have posted are the most current pics we have.

husband works a 40 plus hour a week job.

I do not take additional pictures on inquiries.

As I take pics they will be posted on my website or sent to puppy buyer.

I try to get pics bi-weekly of buyers puppies but that is not always possible.

I do not take requested speciality pics such as in a certain pose, with a object ... etc.

I do NOT Video Chat or do Face Time.

I'm Old School - raising Quality Beloved Puppies as a enjoyable Hobby and not as a 2nd Job.

I do not send Adult/Parent Pics.​​